The last weeks of the semester have been quite hectic! Since I last wrote about Zutorie, the kinetic cabinet, I had been working and studying 12-16 hours days, 7 days a week! I will try to recollect the final steps of the production.

Last I wrote, I had been able to cut all the wooden parts I needed for the body of the sculpture. From that point, I needed to stain the many wooden components.

I started with the frame for the window, as I wanted to be able to give it to the glazier and continue working.

The varnish process took the longest, as three layers were needed for each part. The most demanding was honestly the body, as it needed to be varnished with the back panel attached, meaning it was quite huge when working on its sides.

In my midterm report, I mentioned bushings that I prepared to hold the gear shafts. At this point, I needed to weld those bushings to the bottom bracket. After that, I sanded the brackets once more, to ensure that they would really be shiny. Finally, I had to cut and drill twelve gear shafts, so that cotter pins and guitar strings could be passed through.

Once the body was tinted and varnished, my friend Catherine Brodeur—a textile designer—helped me shop for velvet, and then place in the back of the piece as well as on the support beams.

With the velvet in place, it was finally possible to start assembling the metal frame to the wooden body. So far, I had only imagined or sketched the piece, so it was quite satisfying to see it come together.

Once I added the gears, it became apparent that the motor was too close to the bigger gears—which was frustrating, as I had calculated things properly beforehand. At least, it was easy to fix by adding washers between the motor bracket and the steel bracket. It was a lot of minute work, but it did the trick.

During my assembly tests, it turned out that the smallest gears would break. For KC-P1, the prototype for Zutorie, the smallest gear was twice the size. For Zutorie, I wanted to have a bigger ratio for the gear train, so I ended up using a smaller gear on the motor shaft, but way bigger gears with more teeth for the second gears.

As the gears are made of glued 1/8″ plywood, the smallest ones would become too weak with a set screw. Luckily, the Concordia Digifab Lab was not busy anymore, as everyone had completed their semester. I was then able to 3d print replacement gears, which turned out to do the job perfectly and be quite nice! Additionally, being black, people staring through the glass window could barely see them, rending them almost invisible.

During the last week before the exhibit, I could finally install the electronics!

When I presented KC-P1, I thought there were too many things to do to set it up. This time, I wanted to be able to simply turn a switch on or off, so that I would not be the only one to know how to set up the piece. And so I did just that, I added a rocker switch under the piece, and an IEC cable socket. The rest would have to be handled internally.

For the anecdote, I was on a crazy schedule, working late, and I almost got electrocuted while running wires in the piece. The rocker switch was set to “off,” however the IEC cable was still connected. When passing a wire under the connections of the switch, I must have touched it because a huge pale blue spark appeared. At that time my worry was really that I could have fried components of my piece and that I had no time to replace any of them. I went on working, but I thought of removing the IEC cable from that point on. A bit later, as I told that anecdote to a colleague from the lab, he made me realize I could have electrocuted myself…

Once everything was connected and functional, I still had to fine tune the behaviour of the software and the hardware. Since the Raspberry Pi camera is connected directly to the GPU, there is no way to use VNC to access the Pi remotely and see what the camera sees.

Instead, I had to install this elaborate setup where the bottom panel of Zutorie is held in place vertically, as the piece is resting horizontally. Then, I could connect a screen, a keyboard, and a mouse to the Pi, so that I could edit its software directly.

The software and the motors are still not completely behaving as I wished, however the Zutorie‘s behaviour is perfect for display at this stage. I want to come back to improve the software at one point.

At one point during the steps above, the glazier called me to let me know that the glass window was ready. On the evening before shipping the artwork for the exhibit, I spent time at the Concordia Wood Shop installing the window to the piece. The whole thing was so big—128″ wide— that I had to work from the floor of the machine room!

On the Monday of the week of the exhibit, I still had no way to move the sculpture out of the lab. That Monday morning, I went to Home Depot with my dad to buy the materials to build a crate.

Whenever I could find a moment that week, I would go at the wood shop to cut and drill, to make sure that the crate would happen. It was such an ironic thing, because working on the crate took time away from finishing my work on Zutorie, however if I didn’t have a crate, there was no way to ship Zutorie… In the end, it all worked out.

Setting up at Eastern Bloc

And so after working until 4am on the day of the vernissage, it was time to ship everything. I was so lucky, because the crate is some 48″ high and the rental truck’s clearance was 49″…

I ended up climbing in the back of the truck as we moved stuff from Concordia to the Eastern Bloc where the vernissage was to take place. Good thing I did too, as Montreal roads are a complete mess, and being there allowed me to prevent the crate from shaking too much.

And so with the help of my classmates and the Eastern Bloc technicians, I was able to move the crate, set up the cleat, and finally put Zutorie on the wall. Overall, I am happy, never mind all the hurdles through which I had to go to build this piece. 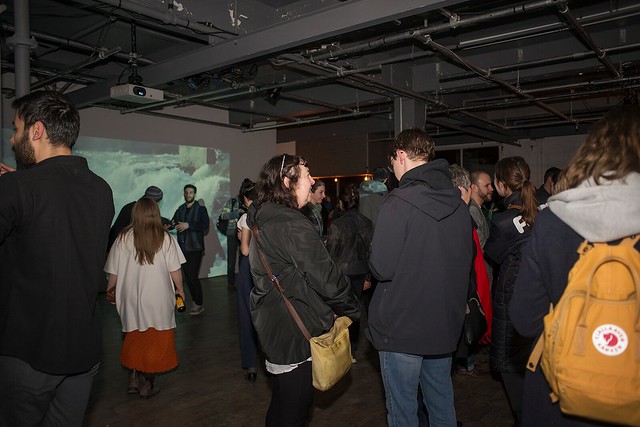