Studies in the History of Media Art: Screen Culture 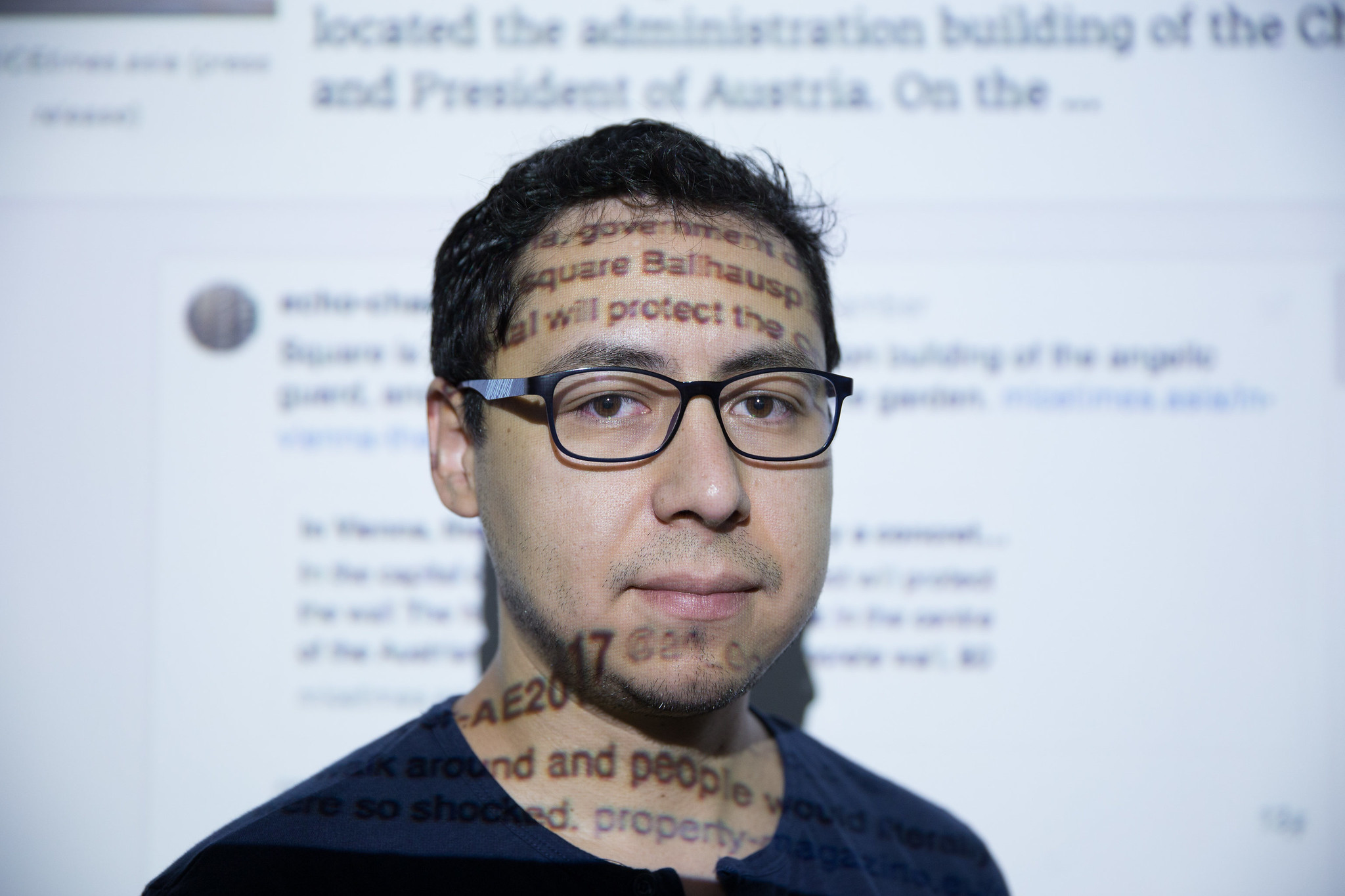 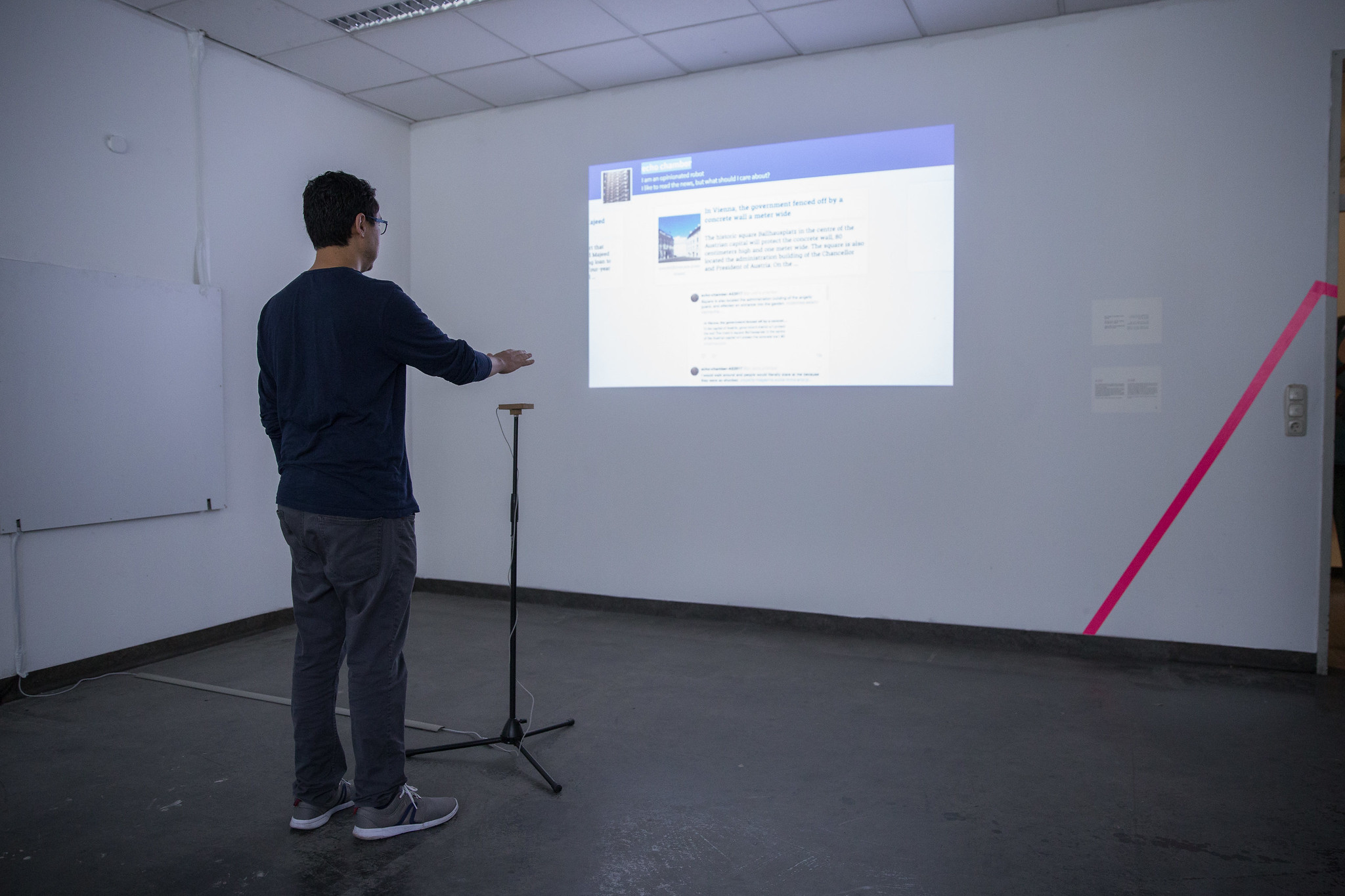 A few weeks ago, Ricardo dal Farra—the professor of my Multi-channel Composition class—organized presentations and performances for the Leonardo 50th Anniversary Celebration at Concordia University. I was only able to attend Christa Sommerer‘s keynote, and the following Q&A. During her talk, Ms. Sommerer presented and discussed artworks showcased at the Made in Linz exhibit.

As a mid-term assignment for the Studies in the History of Media Art: Screen Culture class, we were tasked to research an artwork that could be related a contemporary news item. I remembered Luis Toledo’s piece, Echo Chamber, which is an installation where visitors can judge news items by enacting a thumbs-up or thumbs-down gesture over a sensor. Over time, the variety of news presented to the audience reduce, causing the namesake of the piece, an echo chamber. As this algorithmic news catering, and how it potentially affects politics and society, is a quite touchy subject these days, I felt it was perfect for the research paper.

While I was preparing my proposal and gathering my sources, I thought that since the artist is my contemporary, I could try to get in touch with him and ask him a few questions directly. With the help of Mr. dal Farra and Ms. Sommerer, I was able to get in touch with Mr. Toledo.

He gracefully accepted to respond to my many questions by email. I would like to thank Mr. Toledo for his time and for the information he accepted to share with me. Below are his responses. Only minor modifications were made for clarity.

What is your background? From an interview with Ms. Sommerer, I understand you are from Mexico, studying in Spain, and in an exchange in Austria. May I ask what made you make those moves, and how it affects you? Any other details you want to share about your progress, personal, academic, professional, or otherwise?

I have a technical background; I studied engineering in information technology and telecommunication, and later worked on software companies wearing different hats. Since I was a kid I loved everything about tech: coding and electronics, later as a grown up, even when I like my day job, I spent my free time reading about media art, playing with weird software art, making videogames and experimenting with electronics, until I decided to get serious and properly study media arts and start an artistic practice. So, in 2015, with a Mexican scholarship I moved to Valencia Spain beginning a Masters degree in Multimedia and Visual Arts. Later, in early 2017, took an Erasmus to the Interface Culture department in Linz Austria. The overhead of moving, and diving in unfamiliar waters is hard, but it worth for me personally and professionally.

Currently I’m finishing my master thesis on the use of the user interfaces as narrative, aesthetic and mechanic resource on videogames and net.art. Looking to keep researching and producing artwork about digital entities, user empowerment and alternative videogames.

What is your stance on creating technological artworks in Linz, the UNESCO city of Media Art? People are most likely receptive, and open to critiques of media and art.

Definitely the context of the Ars Electronica Festival is a safe place to exhibit media art, people are more open to ride up and experiment all kinds of strange art pieces. A diverse attendance embrace Duchampland and Turingland to share the same space. In short experience living in Linz, I feel openness to arts, there are always galleries presenting young artists, noise concerts, performances, experimentation as the norm all in such a small city. It also means that creators support each other but also strongly compete, pushing the quality of their works, and force them to look for outside places to exhibit.

What is your stance on presenting media/technological artwork in the context of a white cube/art gallery?

It is an interesting question; the art gallery already have positive and negative implications per se (granted recognition, art institutionalization, and so on). With the use of digital materials (form) there is a risk of disconnection between the artwork and its exhibition space. Its sometimes sad to see documentation of the digital art pieces when the actual entity is alive somewhere/somehow like in the internet. I guess that think in the gallery dynamic could be an artificial pressure and comfort zone for new media artists. But reality is complex because of the economics and validation systems in the cultural ecosystem.

Was your piece presented in its own room, or did it have to share space with other artworks?

From photos I found online, and part of the video interview with Ms. Sommerer, I understand the presentation to be of a projected interface in front of which a gesture sensor is placed on a stand. Are there other conditions for the presentation?

The first iteration of this project was similar, without the pedestal, using a camera for the hand gesture recognition; but in this exhibition I changed it to meet the light and space conditions. Originally I planed to use a 32 inches monitor instead of the projection, but could not grab one.

There was a small text on the wall, next to the projection, with three simple instructions on how to vote a news item, and how to navigate between them.

It seems that the audience is presented with a notification window once a judgment is passed on a projected news item. Are there any details given to the audience to explain whether the echo chamber is reinforced or widened as per their choice?

On the screen there is no direct information about the consequences of the users vote. They have to go further and read the description/statement on the wall. After the exhibition I realize this is something to improve for next versions.

On the technical side, it seems like you are making use of a Leap Motion to detect gestures. What other technologies did you use to create your artwork? For example, what was used for the interface, the visual presentation?

This project runs on a local webserver. At the front-end I’ve used plain HTML with the Leap Motion JS library and their widget system and other two slightly modified libraries: Simple Carousel by Tobias Zeising, and Sweet Alert 2. The back-end was built in Python with a modified implementation of the MarkovBot library by Edwin Dalmaijer, and the Twitter, Google and Wikipedia libraries. All open source.

In the interview with Ms. Sommerer, you mention using a database and a bot. Did you develop those, or were you able to leverage existing software? Where did the news item come from? Did you obtain any assistance?

I’ve developed the core bot logic using the previously mentioned libraries with small changes to make them work as I need it. The news were continuously fetched from the google news aggregator services (Google News), with a set of different geo-locations parameters; taking care to avoid personalized responses from google, so all the bias were managed by the bot. The database stores the complete news articles and Wikipedia abstracts on the news topics, and tracks the score given by the votes. I have not direct assistant on the software part, I found the open source community is very important not only to distribute content, also to spread knowledge and to express awareness. For the physical installation and setup I got assistant from the IC staff.

How did the audience react to your piece? Are there things that surprised you, that you did not expect?

The responses were mixed, some people looked askance at the projection or maybe read the headlines and kept walking, others (without reading the instructions) tried to interact successfully or not, but also kept walking. But, gratefully, some people were truly interested in the artwork and the concept, maybe guided by curiosity, spend more time browsing, voting, and reading the abstract, some were even boldly looking to discuss the proposal. Something that I didn’t expected, but happened, was people touching the Leap Motion sensor, pushing and swiping looking for interaction. I’ve learned a lot from looking and talking with the people on the exhibition floor.

Are you satisfied with your artwork and its reception? Would you be interested in showing it again? Do you plan on making it evolve, iterating different versions, or do you prefer it remains as is?

I’m satisfied enough with the concept. I have nothing against showing it again as it is now, but definitely like to create a new version; maybe disassembling its parts to focus the attention on specific questions individually, and there are important online-only components I would like to highlight.

Were you satisfied in presenting your piece in what seems like a white cube context, would rather/also present it in another context?

I like the experience of showing the piece at the Ars Electronica Festival, where the attendants are more open to face and discuss media arts; the first iteration of this project were exhibited at a student fine arts fair, and the users engaging were lower. I guess it usually depends more on the context of the exhibition rather that if its a white cube or not. Nevertheless, I feel interested in make and exhibit digital artwork in the digital space, when the project could express itself fully, no matter if it gets less attention or recognition, with the downside of losing the opportunity to interact with the attendants.